The Institute for Government (IfG) recently produced the third of its Whitehall Monitor reports. If you haven’t had a look you should - it’s an interesting and well-written report by Gavin Freeguard and team that summarises the current state of central government “in 163 charts”.

IfG have gone through large amounts of open data and government reports to provide a data-led warts and all perspective on the state on Whitehall today. For what it’s worth in my view it’s not just a fair assessment, but it is presented better than many of the internal reports we see prepared for senior government leaders.

I spent much of the day of publication trying to avoid bombarding my Twitter followers with a stream of the team’s effective data visualisations. But to help get it out of my system some of the highlights for me included those at the end of this blog.

Perhaps the most sobering graph from my perspective was this on government spending:

The spending analysis performed with the help of open data startup SpendNetwork was frustrated by the difficulties of data interoperability between departments. It is not the first time problems with spend data have been highlighted, though it is something where there is an incentive inside government to sort this out and teams led by the Treasury are on the case.

The authors give a nod to the progress the UK government has made on open data, but also notes some of the ongoing challenges:

Improving how it uses data could help the Government with some of this. The UK receives plaudits (often justified) for its record on open data, but problems remain. Too much data is still locked in PDFs and of questionable consistency, making it more difficult to use than it should be. Some data is still of poor quality – such as that relating to the professions of civil servants in many departments, which should be basic management information. Some data isn’t published at all – including on the performance of companies providing public services. Government is bad at explaining what some key data means – for example, changes to spending plans, or the impact departments’ policies and reforms have. These problems of quality and accessibility point to a wider problem: a lot of this data, which could provide greater insight into how government is run and increase accountability, isn’t being used by government, Parliament or the public

Beyond the ongoing horror that PDFs still make too frequent an appearance on data.gov.uk there is an important point made here: the data isn’t good outside because it isn’t used sufficiently inside. It is the main learning from the last few years of the open data programme that I led across government, where we made (and continue to make) progress. But where in the end, the process was too much of a layer on top of existing government practice. Now the need is to get stuck in and fix government’s data infrastructure. This principle of dog-fooding the only real way to improve data quality for those outside.

The report also proposes a series of principles about open data. I have to say that I quite like them, and they are definitely in the spirit of the changes I have been tasked to make: 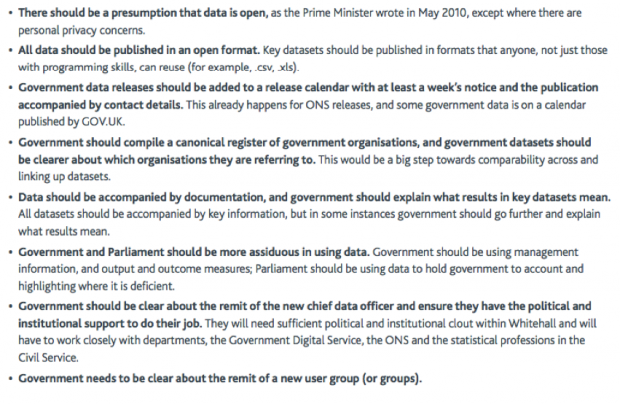 There are inevitably a few places where I have some difference of views from the report, for example the oblique questioning about our ongoing commitment to open data  (“It would be a great shame if recent progress were lost, and the light shone on government – for which the UK is now globally renowned – extinguished.”), and the report repeats a slightly odd point from the otherwise excellent independent review of our UK OGP National Action Plan about moving from four open data groups to zero, probably as a result of the report going to the printers before some of the changes we have now made were public knowledge. There has been some post-election and pre-Spending Review reorganisation but the new external Data Steering Group met the other week, and more detail about the role that ODI will play to connect government with a broad range of open data organisations will also be out imminently.

As the open data movement has matured there has been growing focus on the economic opportunities of open data and the return on investment for government. And there is the still under-explored area of what I think of as a new branch of near-to-public-services such as MoveMaker and SkillsRoute, many of which have been incubated through the work of the ODI and Nesta using government investment. But basic transparency and accountability of government to citizens remains a critical element of our open data programme.

Perhaps the ‘army’ of armchair auditors hasn’t yet been fully mustered, but this activity does exist, and government is better for it. Non-profit organisations like Institute for Government, Policy Exchange, the Taxpayers Alliance and the Open Knowledge Foundation comb government data to probe government spending, and in the fields of international development and corruption Transparency International, ONE, and Global Witness are just some of those deeply committed to using open data.  A new band of data driven journalists such as Chris Cook and James Ball are using data to find the next scoop, and there are individuals who put in time and energy to press government to maintain commitment and progress on open data like Owen Boswarva and Giuseppe Sollazzo and Will Perrin. And there are those data-led companies such as SpendNetwork and OpenCorporates  who have built both valuable financial services alongside an ethical approach to weeding out inefficiency and corruption. And finally there are many developers who take part in hacks for public benefit like the Parliament Week accountability hack at the weekend.

So thank you to the Institute for Government and all those other armchair auditors out there. We should all celebrate those individuals and organisations that provide this very new type of public service. 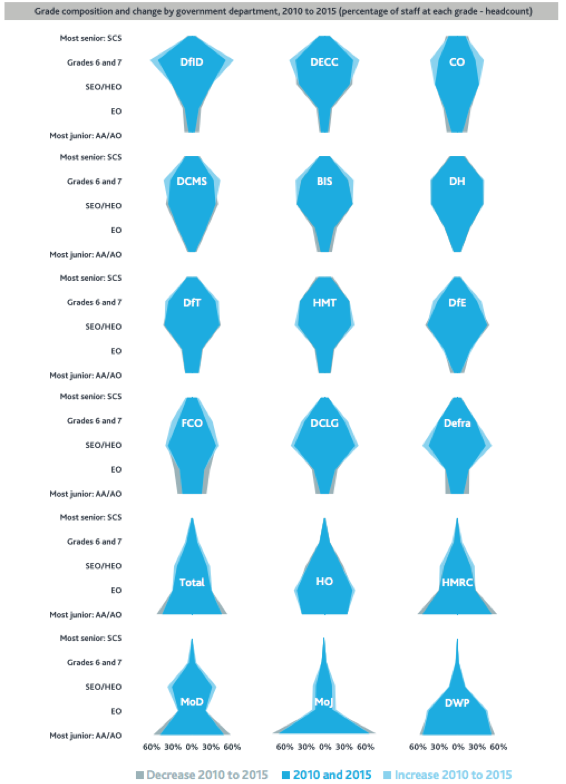