As well as the significant drive to open up public data nationally and reference datasets on data.gov.uk work is also underway to provide access to local data. A range of organisations including the NHS, education authorities and local councils currently collect large amount of data which can be opened up. As part of the ‘Smarter Government project’ the Prime Minister said

You may have noted some of the new applications listed on the site, a number of which have been in the news lately. 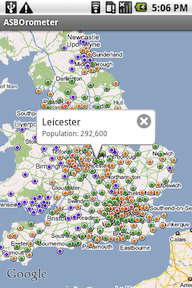 Of particular note is the ASBOrometer which is a mobile application (iPhone and Android) that measures levels of anti-social behaviour at your current location (within England and Wales) and gives you access to key local ASB statistics. This app was number one in the top free UK iTunes app store last week.

Blog design We are continuing to enhance the site design of data.gov.uk and make improvements to the site’s usability. In particular you should notice a difference to the presentation of this blog post and the main blog page where the …

Our blog so far has been about the significant drive to open up national public data and reference datasets on data.gov.uk. As well as this, lots of work is also underway to provide access to data from bodies outside central government. A range of organisations including the NHS, schools and councils currently collect large amount of data which can be opened up. As part of the Putting the Frontline First: Smarter Government paper the Prime Minister said

Now that we have launched our developers are settling into a more regular release schedule. A lot of the work that they are doing is on the back-end – making things more stable, making it easier to build on, etc. However, we are keen to keep improving the experience you get, so we have been sneaking in some extra items so the site doesn't get stale and responds to your feedback – either on the site, via e-mail or on Twitter. One of the areas we were most concerned with was accessibility and compatibility – we want to offer everyone the same high quality service.