1983 introduced the pound coin and wheel clamps to the UK and the polling company Ipsos Mori, began its annual measurement of the public’s trust in leading professions. Each year politicians generally or journalists are ‘least trusted’. To date, the largest rises in trust have been for the civil service and for scientists. As a data scientist for the civil service, I recently had an opportunity to hear from the public how far that trust goes and what it depends on. 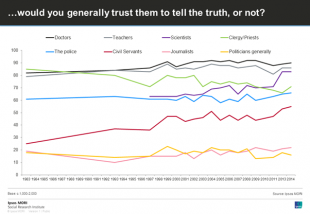 Why are ethics important to data science?
Data science is a form of advanced analysis which allows us to conduct previously impossible levels of (digital) data collection, measurement and data manipulation. It can reduce mind-blowingly massive amounts of data into digestible reports which policy and decision-makers can use. But, important as it is to make evidence-based decisions, should we monitor everything and everyone all of the time? Are there lines which society expects us not to cross? For example, the UK could theoretically change the law to mandate a 'black box' in every car to monitor and regulate traffic flow, with data science crunching the numbers. Maybe we'd all get home faster and safer, with dangerous drivers being identified… but would this intrude too deeply into the personal liberty of the individual? This, and other questions, were explored in a public conversation on data science ethics taking place across the UK.

So what do the public think?
I was lucky enough to be part of the conversations taking place in Taunton (home of the UK Hydrographic Office, Debenhams Head Office and Blackthorn Cider) over two weekends in February. Other workshops were taking place in Sheffield, Wolverhampton and London. Whereas many government departments directly serve individual members of the public on a daily basis, I work for the statistics arm of the Ministry of Defence (MOD) - an area that doesn't have the largest direct connection with the wider public. This was a real opportunity for me to hear, unfiltered, what the public thought. The event was run by the Government Digital Service (GDS), with Miranda Mowbray from Hewlett-Packard and I answering questions about the details of what us data scientists do.

From the outset I've said that ethics has to be built into the DNA of data science so that it remains there from this point forward. I'm reassured because this is what I see my colleagues across the public sector doing. Inviting the public to an event like this one was crucial to establishing whether we have a mandate from society and if so, where its ethical boundaries might lie. Having spoken with many other areas of MOD about Data Science I know that wherever data science happens, the ethics conversation is happening too. I like that.

Both Miranda and I were really pleased by just how informed the public were and how considered and rounded their comments were. Some participants expressed no concern with the government gathering and joining massive amounts of data together whereas others had reservations. We gauged how people felt on a scale of potential applications of data science, from helping people to receive local tailored public services to tracking down terrorist suspects.

So what does this mean for government?
I have no idea whether my own observations will be reflected in the more professionally written and fully-considered report which will follow after the consultation is complete, but for now I took away three key messages:

The group wanted to ensure that we worked with purpose rather than simply rummaging through people’s lives – that there should be a social benefit. Good. That’s what we’re here for. They found the public consultation itself to be a decent way to keep ourselves in check to their satisfaction. Miranda and I both saw the benefit of including people in data science work who are simply there to question, challenge and to bring alternative perspectives and would love to see that done whenever possible in data science projects.

I'm delighted to see morality and ethics being embedded in the values and working practices of my profession in the civil service. Perhaps us civil servants do deserve the trust that it appears the public have in us? The public's input will help us to gauge where on a scale our future data science projects fall and what action would be appropriate to ensuring trust remains intact. If we remain mindful of ethics then we can be sure, and the public can be reassured, that we are not moving towards Orwell's 1984.