Last week saw the launch of the UK’s 2016-18 Open Government National Action Plan - the third plan the government has produced as a member of the global Open Government Partnership.

The plan contains an impressive list of commitments, from extending company ownership transparency to opening up elections data, and collecting granular data on government grants to enhancing disclosure of payments to government for the sale of oil, gas and minerals.  But perhaps the most impressive is the commitment to fully implement the Open Contracting Data Standard, starting with the Crown Commercial Service and High Speed Two, and then rolling across government.  This will create a public record of how government money is spent on public contracts and with what results. 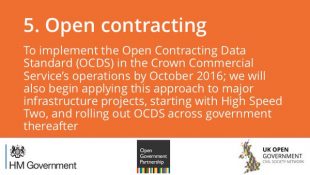 As the plan itself recognises, though an impressive list, it’s not an exhaustive one. So the commitment I’m most interested in is left to last, to: ‘identify, develop and implement robust and ambitious open government commitments on an ongoing basis through collaboration with partners in governments, parliaments and civil society across the UK.’

This plan itself has been an important exercise in developing policy in an open and collaborative way.  Work towards it started 18 months ago when the Open Government Civil Society Network (OGN) began crowdsourcing ideas for commitments from civil society.  Through an online platform and series of workshops around the country, we collected 79 ideas from over 250 members of civil society for reforms.  These ideas were refined and prioritised by the OGN into 28 draft commitments for discussion with government.

Following last May’s General Election, those discussions started with officials and Matthew Hancock (Minister for the Cabinet Office), and gradually picked up pace to the beginning of this year, when we jointly hosted a series of workshops on the action plan.  Off the back of these workshops, a number of the commitments were the subject of detailed discussions between policy officials and members of the OGN to develop and agree the detail.

Commitment 13 jointly commits us, as coordinators of the OGN, and the government to continue this open and collaborative process, and extend it further.  The process has by no means been easy nor perfect, but perfect can certainly be the enemy of good.  The key is to continuously make what comes next better than what came before.  With that in mind, it’s a good time to reflect on what we’ve learnt.

One of the lessons I’ve learnt from four years of coordinating the OGN is that there’s some truth in the 1% rule for internet culture, which states that 1% of an internet community will create material, 9% will edit it, and 90% will only view it.  The percentages might be a bit off and these are certainly not static groups (people move - and should be able to move - between them depending on the issue), but for our purposes I think this means we need to strike the right balance between collaboration, participation and transparency in the process.

We need to open up the nuts and bolts of the process to the “1%” with the interest, knowledge and skills to actively collaborate in developing a specific commitment.  We need the participation of the “9%” in commenting, challenging and improving ideas, drafts and policies. And finally, we need the “90%” to know what’s going on, not least so they can step into the fray when they have something to say or offer.  With limited time and resources it can be easy to skew to one, but all are needed to get maximum value.  This all means having a clear process, defined and accessible opportunities to get involved, and feedback loops to those involved and less so.  The basics of any good participatory process, but the things it can be hard to nail down when the pressure is on.

So that’s the challenge we’re setting ourselves. Over the coming months we’ll be working with officials, members of the Open Government Network and others to determine what it looks like in practice.  Get in touch if you want to be involved, and for those just watching for now, we hope to see you at some point.
Tim Hughes is coordinator of the UK Open Government Network and programme manager at Involve